Femme It Forward comes to Saratoga Performing Arts Center on Friday 6th September 2019! A "multi-city series of women curated events featuring leading female musicians and entrepreneurs", Femme It Forward is a "multi-market series of events and initiatives [which] will feature a range of events, from brand activations (who doesn’t love a good brand activation), panel discussions and comedy shows, and concerts from a list of participating artists", and the performance at Saratoga Performing Arts Center features Cardi B, Teyana Taylor, City Girls & Nicole Bus! 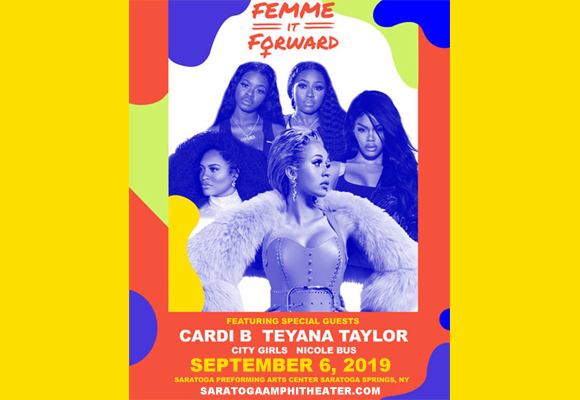 Grabbing the world's attention in 2013 when several of her Vine and Instagram posts went viral, American hip hop recording artist, comedian and television and social media personality Cardi B made her musical debut in 2015 when she featured on the Shaggy track "Boom Boom". She also joined season six of VH1's reality television series Love & Hip Hop: New York that year, and continued on the show throughout season seven. The following year, she released her debut full-length mixtape, Gangsta Bitch Music, Vol. 1, and Gangsta Bitch Music, Vol. 2 was released in 2017. Later that year her debut commercial single, “Bodak Yellow,” was released, and by October reached number one on the Billboard Hot 100 chart, making Cardi the first solo female rapper to reach the top spot since Lauryn Hill in 1998. The song stayed at the top of the charts for three consecutive weeks and was certified seven-times platinum in the US. Her 2018 debut album Invasion of Privacy, debuted at number one on the Billboard 200, won Best Rap Album at the 61st Annual Grammy Awards and has been certified triple-platinum.