Named by the late, great James Brown as music's "best white soul singer", Rod Stewart has also spent his glittering career conquering the worlds of rock and pop music with a true and unique talent that has made him every inch a star! Now, the lengendary singer comes to Saratoga Performing Arts Center on Wednesday 29th July 2020 to entertain fans with a show that sees him performing his self-penned hits like ‘Tonight’s The Night’, ‘You Wear It Well’, ‘You’re In My Heart’, ‘The Killing of Georgie’ and ‘Maggie May,’ as well as covering some of the enduring standards that have continued his success throughout later years! Don't miss your chance to see a master at work! 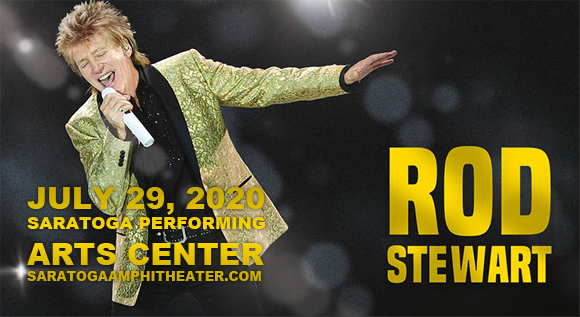 Beginning in the early 1960s as a busker and eventually becoming one of the world's best-selling music artists of all time, British singer and songwriter Rod Stewart has sold over 120 million albums worldwide throughout his five decade career. Throughout that time, Stewart's unique voice brought him fame in a variety of genres, including pop, rock and soul, and he enjoyed success not only as a solo star, but also with two hugely popular bands: The Jeff Beck Group and The Faces. His career has seen him chart nine number one albums on the UK Albums Chart and a whopping 62 UK hit singles, including 31 top 10 hits and six number ones. In addition to his success in Britain, Stewart has charted 16 top 10 singles in the US, including four Billboard Hot 100 number ones. A Grammy Award-winner, he has also been honored with a Brit Award for Outstanding Contribution to Music, and has been inducted into the Rock and Roll Hall of Fame twice (once as a solo artist, in 1994, and as a member of the Faces in 2012), as well as the UK Music Hall of Fame. He was also appointed Knight Bachelor in the 2016 Birthday Honours for his contributions to charity and music.