Matchbox Twenty have always given steady releases and with their music, comes exciting and unmissable tours! Matchbox Twenty fans can now grab the chance to see them live in concert in 2022 as they embark on another journey across North America! Get ready for an unstoppable showcase of some of their biggest material to date! They will be heading to Saratoga Performing Arts Center on Sunday 30th July 2023 (Rescheduled from Sunday 31st July 2022) (Rescheduled from Friday 3rd September 2021), with support from The Wallflowers – book your tickets before it's too late! 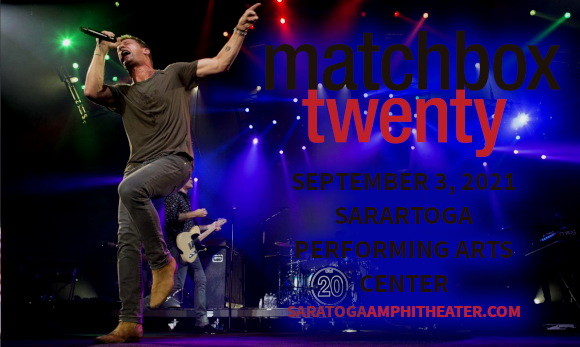 Epic rockers Matchbox Twenty have had a successful career from the get go ever since they started their journey back in 1995. With their unique sound they have given their fans impressive studio releases to keep every one of them waiting on the edge of their seats to see what's coming next. 2022 brings the talented group back to the stage as they embark on their extensive tour – it's no wonder that tickets are already selling fast for their highly anticipated dates!

Members; Rob Thomas (lead vocals, guitar, keyboards), Brian Yale (bass guitar), Paul Doucette (drums, rhythm guitar, backing vocals), and Kyle Cook (lead guitar, vocals) first got together during one of the most exciting decades of rock and alternative music, the 1990's. As they created the band in 1995, they were quick to create their debut album and released it by 1996. Yourself or Someone Like You was an instant success, putting them at the top of the list for the must-watch bands at the time. The record became a twelve time platinum hit in not just the US but also in Australia, Canada and New Zealand! Their international fan base was born and gave them the stepping stone they needed to release follow up material, from their second album, Mad Season in 2000 and More Than You Think You Are in 2002. Both of which topped the charts once again and became firm favorite releases in the rock genre.

If you're a Matchbox Twenty fan then you'll know of their short hiatus between 2004 – 2007, but this didn't stop them as they transformed the music scene once again and came back bigger than ever with their album release of Exile on Mainstream, which put them back on the map and grabbed a gold certification for their work. In 2012, they dropped their most recent creation to date, North which shot them back up to number one on the charts!

2022 brings an exciting announcement as they have released the news of yet another incredible tour – don't miss out!